Blackmore's note: This is me experimenting with more blog-type posts, so this post might be rough. Also, this would've been published earlier, but I only got internet in my new place just a few days ago. Fun.

So a pivotal moment happened to me, a few weeks ago. A moment that every family member, every friend, and maybe every Dane has experienced before me, long time ago. A burden on my bucket list that I can finally check off.....

It's watching D-A-D live for the first time, of course. Only took nearly 21 years for it to happen, but I digress. 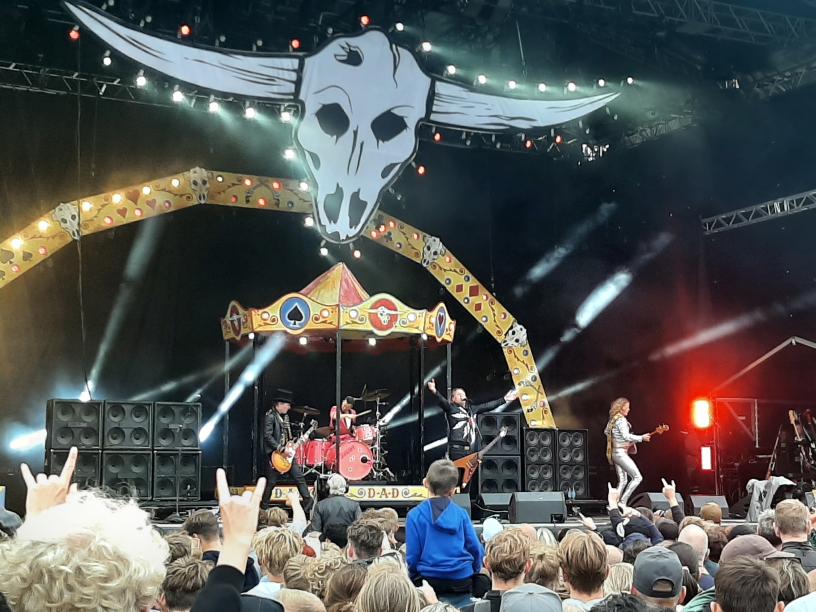 For all of you, who probably don't know, D-A-D (formally known as Disneyland After Dark) is perhaps the biggest rock band in Denmark today. A band who has rocked the Nordic population (and most of Europe) many times with their catchy riffs, uniquely funny lyrics, and cartoonistic stage show in over 37 years. a band, whose music I have listened to since early childhood along with many other bands, courtesy of my dad.

Funny how I bring him up here, as he's been my introduction to music and is also the mega chad for taking me to so many concerts of many important bands in my life. Without him, I probably wouldn't have seen live bands, like AC/DC, Iron Maiden (3 times), Aerosmith, Rammstein, Red Hot Chili Peppers, Pretty Maids, Black Swamp Water, The Pink Floyd Project, Nickelback (yes, really), or even Black Sabbath. He's honestly the best dad ever, and I wouldn't trade him for the world, even if it meant having the power to ban either cringe or evil things in the world.

Having said that, however, it is somewhat mindbogglingly that until now, I had not seen the one band, who no only plays multiple dates every year in this country, but also my father has seen more times than he can count. It's a mystery that neither he nor I can make sense of.

Doing the last few years, it actually became a mission for me to attend a D-A-D concert. And I prepared myself. I sat down to listen to every album of their discography (including live albums), and I anxiously waited for a live date that was free of scheduling conflicts. Finally, a live date was set in early March of 2020, and my dad bought the tickets. Unfortunately (and very annoyingly) the Corona from China came to Vikingland, and the show was cancelled one week prior...

The show was reschedulled until it was eventually cancelled altogether and later replaced by a couple of smallar sit-down shows. My dad and I refused to go, mainly because sitting down at a rock 'n' roll show doesn't really compute with us. We told ourselves that we would just wait until Covid-19 was finally over. It took over two years, but we got there. seperately.

The show was at Grøn Koncert in Kolding (transl. Green Concert. Think of it as Lollapalooza, but smaller and sponsored by Tuborg), so it wouldn't be the whole full-length concert experience from then, and it was packaged with every insert any current Danish pop act ever. But I didn't care. This was finally my chance to take.

I arrived shortly before D-A-D took the stage. My plan was to see the band, buy a t-shirt and go home. Got a burger at Circle K, because I'll be dammed if I have to pay 80 kr for a burger worse than a McD burger, and got to the entrance to see a man yelling at police, while they restrained him for unknown reasons. Good times.

After buying a tour t-shirt, waiting for the band behind me to finish and taking a pic with a group of strangers, the band finally came on stage and happyness turned to eleven, when the opening notes to Riskin' it All started playing. At long last, a dream has been fufilled.

The show itself was pretty good. Aside from the festival-length, they played pretty solid throughout with a good set of songs. I was very pleased with the inclusion of Written in Water. Was not expecting that, but awesome. Cooler still was drummer Laust Sonne on the carousel, which would rotate itself on random intervals. Stig, the bass player, had many of his nice custom two-stringed basses including that big iPhone bass with a camera and a screen. And the Binzer brothers of course handled their axes like champs. Also, my voice was almost non-existent after the show due to singing along like crazy to songs (in key, because I'm kool like dat).

After the band played their final song, Sleeping My Day Away, I went home as a happy man, played some board games with family, ate ice cream and went to bed.

It might be strange to call this a special moment. It definetely not a rare moment, as the band is tour-happy across the country, and I've seen more important bands that I've probably never see ever again. However, I think the waiting out builded up the anticipation and hype for it all. Maybe it's also because it's one of the few time that I'm at a concert without my dad? I don't know, but it feels weird.